There’s a growing narrative surrounding NES games. That many have not “aged well” and that some are even borderline playable due to cryptic design or difficulty when the rose-tinted glasses are down. This is undoubtedly going to upset a lot of folks, but I can’t help but agree when it comes to the earlier titles in the system’s lifespan. Outside of the games that make Top 10 lists time and time again, I feel like the NES’ most innovative and approachable titles came towards the end of the system’s lifecycle. In many cases, these games released well after the SNES and Genesis, which no doubt plays a part in their obscurity and rarity. Rockin’ Kats, which came exclusively to the NES and Famicom in 1991, is one of those games that got lost to the annals of time since the Super NES and Genesis were all the rage when it landed on store shelves. 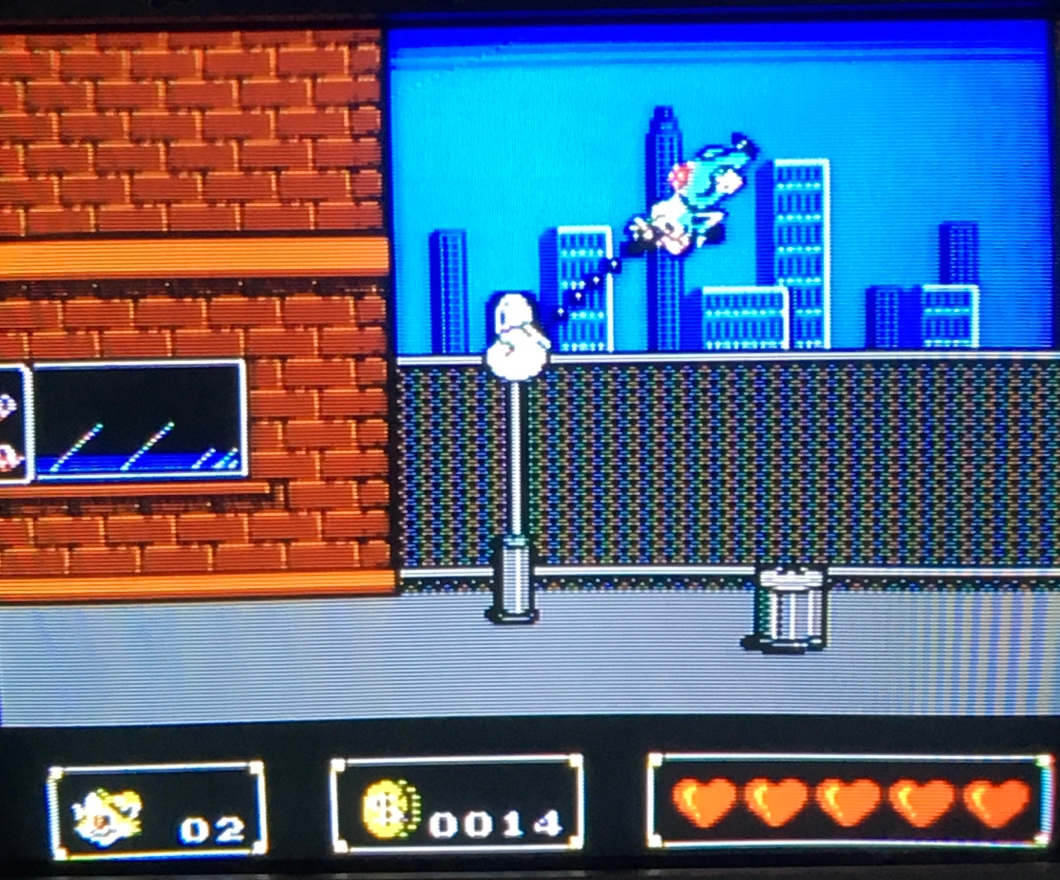 And it’s a damn shame too, because Atlus’ attempt at a cartoon cat mascot platformer is leaps and bounds above many of the “me too” mascot games churned out by the 90’s despite the fact that it rolled with obsolete hardware. You play as Willy, who looks like a jazzier Tom with an extendable boxing glove that doubles as not only a means of attack but also a means of traversal. Willy can latch onto certain parts of the terrain (light posts, branches), spin around and launch himself to greater heights using his glove. In addition, he can also punch the ground or walls (I’m glad Atlus had the hindsight NOT to name this kitty Kyle due to the latter) for a little extra oomph. Last, but not least, he can grab items such as eggs or jugs of beer and then toss them back at enemies. In all honesty, Willy’s repertoire of moves reminded me a bit of Ristar, and that’s a definite plus. 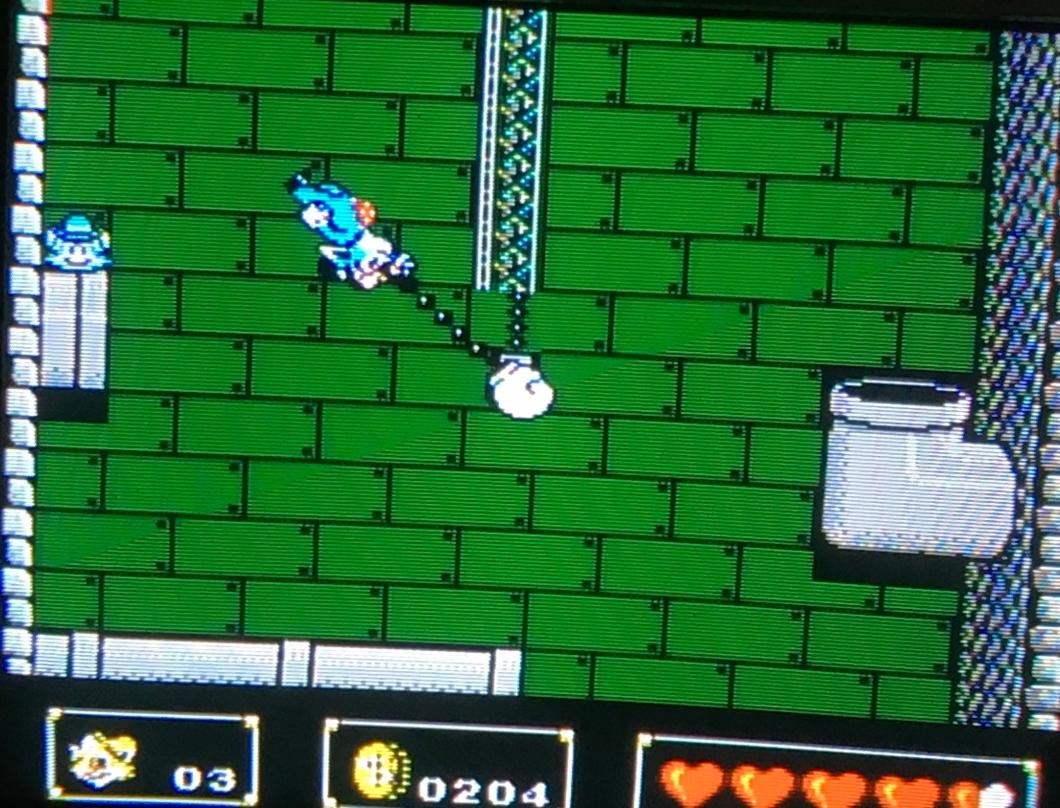 The game is laid out across five different stages (or six…but we’ll get to that in a minute) that are accessed via a TV interface. Each “channel” sees Willy’s girlfriend, Jill, being snatched up by the henchmen of Muggsy the gangster Bull Dog. Of course, it’s up to you to get the girl back in each scenario. Ranging from the streets of New York City to the Wild West, level design is super-linear and fairly simplistic.  Later levels do add a few new setpieces and obstacles to deal with, such as platforms that move around once Willy latches onto them, but beyond that you’re simply running, jumping, and smacking whatever cartoon canine comes your way into oblivion. There are a few screens featuring vertical scaling, and to me, these are some of the best moments in the game. You’ll often have to use  a combination of Willy’s moves in order to reach the top and advance to the next scene- ricocheting off the walls and then latching onto a metal pipe to fling yourself upwards is really satisfying stuff to pull off.

While the simplicity of the level design isn’t a downside, I feel that the bosses are perhaps too frequent and far too simple. They all follow incredibly basic patterns that they won’t deviate from (such as this basset hound aviator who moves in an arc from left to right and will drop either a ball or bomb) and take a considerable amount of hits to down. You’ll face two per stage- a mid boss and an end of stage boss. Chances are, none of them are going to challenge you much and even if you do play recklessly, your life meter will always be filled after dispatching the mid-boss. I would’ve liked to see some encounters that took advantage of the boxing glove gimmick. A boss whose sole weakness was his own projectile that could be launched back at him would’ve been nice and completely doable. A vertical auto-scrolling scenario that forces the player to keep moving upward during the fight would have been a great way to cap off the adventure or serve as a penultimate battle. It’s a missed opportunity, especially when the fifth stage pads things out a bit by making you battle every single one of these guys over with no change-ups in patterns or arena (save for one).

Even though the level and boss design is far from riveting, it’s still a lot of fun just bouncing around and smacking the baddies off screen during the less interesting sections of the stages. Rockin’ Kats has an undeniable charm to it. Boss characters’ eyes bugging out whenever you land a blow, Willy doing an adorable “ta-dah!” animation whenever he lands from a somersault and a decent soundtrack that compliments whatever location you’re in. Even if there’s some apparent padding and a lack of difficulty leading up to the final encounter, it’s hard not to like what Atlus was going from here regardless of if you’re looking at the historical context or simply playing it for the first time in 2019.

Fortunately for those who would like more than a breezy afternoon of platforming fun, there is one secret worth noting. If you decide to let the game sit after the credits roll, Muggsy will challenge you to one last fight and will take whatever power-ups you may have as well as knocking your life counter back to 2. While the boss fight is the exactly the same, the platforming challenges in this hidden sixth level are kicked up quite a few notches and you might encounter a few game overs trying to pull off the advanced techniques necessary to reach Muggsy for a second time. You still get the same ending though…so if you’re looking for an honest reward after tackling this extra content…you’re out of luck. Still, I say it’s worth playing through just to see the game’s primary gimmick stretched to its limits.

To conclude, while Rockin’ Kats may not be as strong as some of the other late release NES platformers such as Surprise at Dinosaur Peak and Panic Restaurant due to an unnecessary boss rush and being a bit too simple at times, it’s worth playing through at least once if you’re a fan of the genre. The presentation is solid, the few times where the boxing glove gimmick is truly tested provide a lot of fun and it’s easy enough to pick up and play without having to ever consult external resources. I can’t help but wonder how much more mileage Atlus could have gotten out of these characters or the glove mechanic had development (or a sequel) shifted to the Genesis or SNES during development but I guess that’s something I’ll be left to ponder for eternity. Unless, y’know, somebody with actual game development skills decides to kickstart a spiritual successor.