If there’s one genre that the current generation is sorely lacking in, it’s arcade racers. Aside from Mario Kart 8 Deluxe and the upcoming Team Sonic Racing, you’d be hard pressed to find any other racer that doesn’t take itself too seriously on modern platforms. Horizon Chase Turbo hopes to ease the drought and takes after such racing classics as Outrun and Virtua Racing to provide something we haven’t seen in a while. Is it able to cruise parallel to its source material, or does it end up lagging behind in the dust? 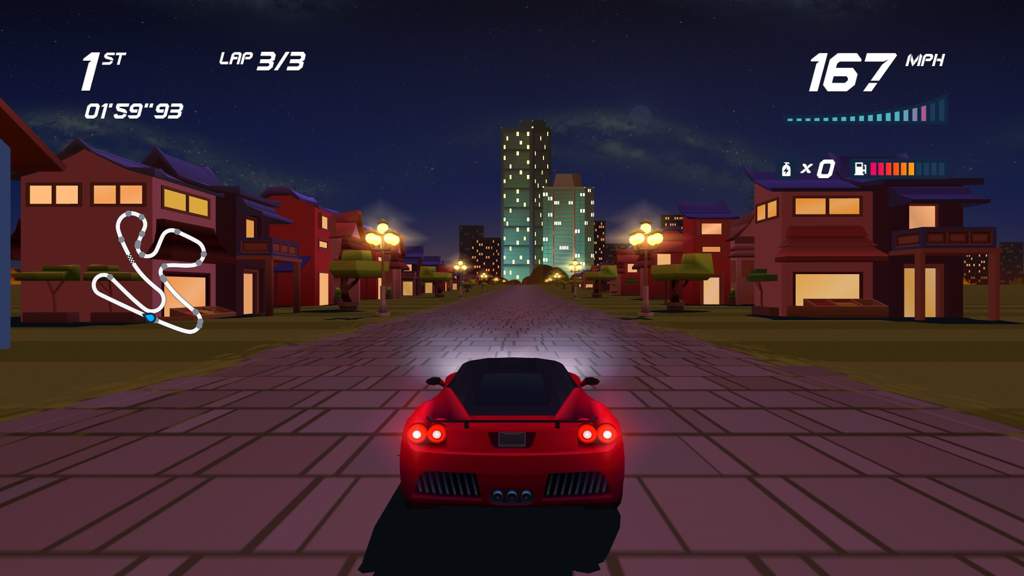 Horizon Chase Turbo offers a handful of modes- Tournament, Endurance, and a World Tour. World Tour is where the bulk of the single player experience is, and works similarly to Burnout 3: Takedown. Here, you’ll race through various real world locations ranging from suburban cities to the Great Wall of China. Getting a podium finish, keeping your fuel levels high and collecting coins scattered about the tracks all net you points. Points go towards unlocking new vehicles (also unlocked by getting first place in all the courses in a given location), new locations and (perhaps most importantly) challenge races. Winning first in these races will allow you to pick from a trio of upgrades that will boost the stats of ALL of your vehicles, and you’re definitely going to want these before trying to bother racking up a ton of first place finishes. 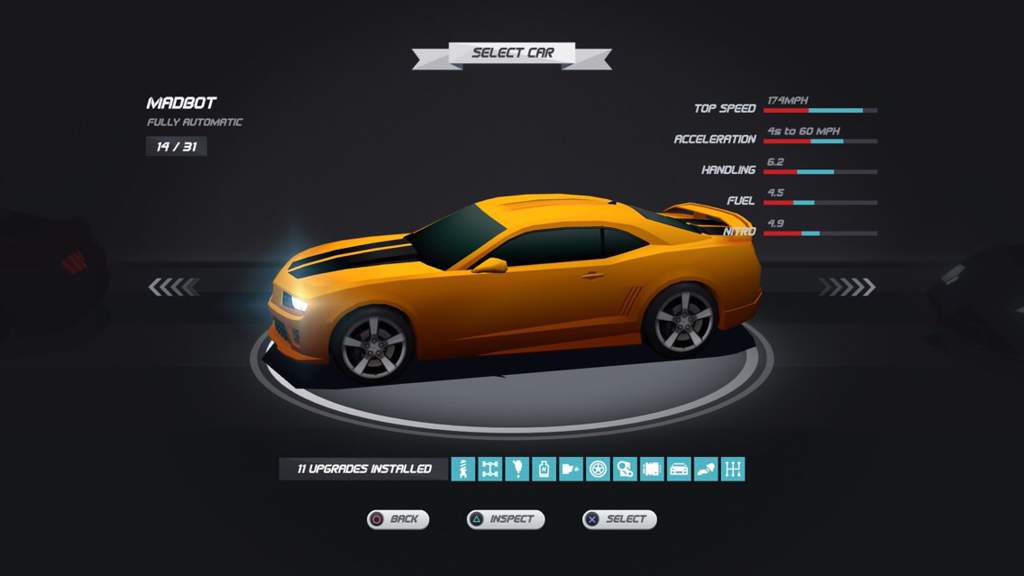 The races themselves are fairly simplistic, focusing more on skilled driving and knowledge of the track than item use. The only real power-up you’ll be seeing are nitro potions, which will grant you one more boost in addition to the three you’re allowed from the start of the race. As mentioned earlier, there are also coins littering each course and these go towards getting a perfect score as you’ll need to collect all of them AND finish first for a “super trophy”. Last, but not least, there are fuel canisters floating around to replenish your fuel gauge. While this mechanic doesn’t cause much trouble early on in the game, it soon becomes vital to memorize where these are once the tracks become longer and when there are more than a few laps involved. 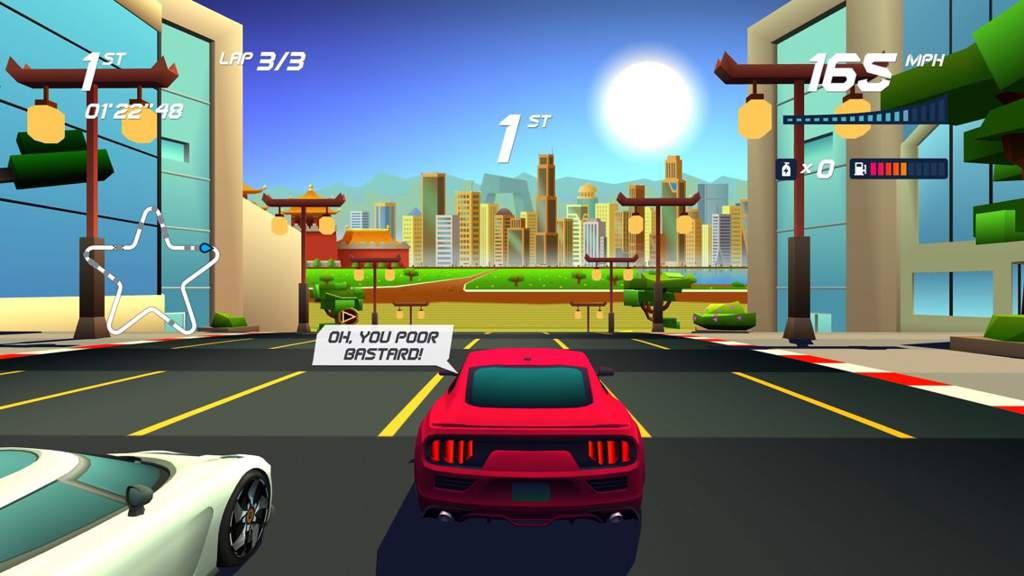 Presentation wise, I think Horizon Chase Turbo really nails the look and feel of a mid to late 90’s arcade racing game. The game sports a clean, simple look with a low poly count and vibrant colors. It would be easy to mistake the game for a conversion of a dedicated unit that might have been sitting outside of a theater lobby. The tracks themselves offer a lot of variation in theme as well as time of day and weather, with the appropriately named “Final Challenge” featuring volcanoes and lightning in the background to make for a truly slick-looking conclusion to World Tour.

Par for the course with indie titles, the game is hard. Really hard. The first few locales aren’t anything that will push your racing skills to the limit, but the AI becomes increasingly Jedi-like as you progress. Narrow roads combined with their ability to swerve right in front of you (which in turn can send them soaring forward) can make just getting a podium finish damn-near impossible without completing all of the available upgrade races. They’re also *really* aggressive, and they’ll often boost right behind and slam into your bumper or side several times in an attempt to screw you over. On top of this, the game uses rubber-banding AI, so you’ll never really be in the clear even if you’re cruising along in first place. Thanks to the developers consistently updating the game, things have become considerably more balanced and while still very difficult, it’s a lot less cheap in comparison to how the game played on day one. 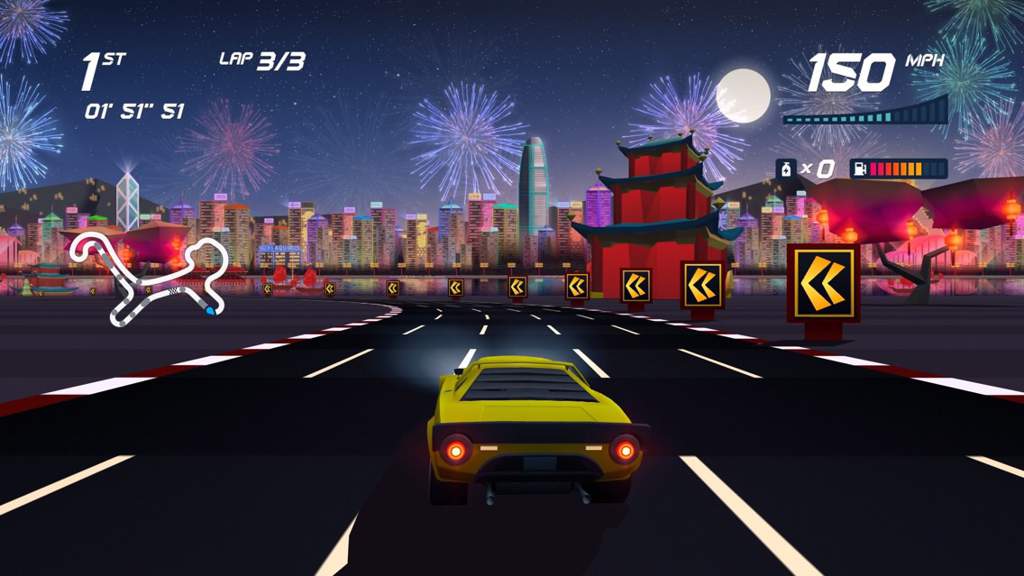 For a $20 game, there is a ton of replay value present. The World Tour is lengthy and quite challenging, with an impressive amount of tracks and plenty of Super Trophies to nab for the completionists out there (just don’t try and get them before obtaining every upgrade- you’ll tear your hair out trying). There are also Tournaments (which, if you’ve ever played Mario Kart, you know what to expect here) and Endurance races that are unlocked after World Tour is beat (a collection of a dozen or more races with various conditions). Last but not least, there’s split screen couch-op, an increasingly uncommon feature in games today. There isn’t much in the way of online multiplayer though, aside from leaderboards for fastest times and ghosts.

Overall, Horizon Chase Turbo is a well-rounded package that I can easily recommend to any fans of arcade racers needing to scratch that particular itch on a modern console. It can sometimes be a bit more frustrating than fun at first, but once you upgrade and unlock more vehicles, the single player content is a blast and World Tour can easily take 8-10 hours just to beat. If you’ve grown sick of the considerably few other modern offerings in the genre and want a breath of fresh air, you really can’t go wrong with this one.

+Vast majority of the tracks are a blast to race on

+Developers have continued to make quality of life improvements since release

-Rubberbanding AI can be obnoxious, especially in the later regions of World Tour mode