Whether it’s the NES/SNES Classic Edition, the dozens of variations of AtGames’ Sega Genesis and Atari Flashback lines or the numerous volumes of Namco Museum anthologies released over the years, one thing’s for certain. There are a LOT of products sold on the merit of remembering gaming past. It can be a good thing when done right. But unfortunately, it usually isn’t these days.

Just as store shelves became saturated with First Person Shooters and games with “dark, gritty” visuals, I believe we are reaching a point where shelves are becoming equally as stuffed with micro consoles and anthology discs that are sold in the name of nostalgia.

Unlike retro-inspired indie games (some of which do a phenomenal job of evoking those fuzzy feelings AND offering a completely new experience), these don’t attempt to do anything more than emulate past experiences. Maybe they’re doing so with an HDMI cable over A/V or Coaxial cables so that they look pretty on a flat screen. Maybe it’s just a disc that can you can officially slide on into your PS4 or Xbone. But other than that…the only things to expect are basic menus and, if you’re lucky, a few new options that often pertain to sound or visuals.

On paper, this is a sound idea to make a quick buck. The concept of retro game anthologies has been around ever since the Sony Playstation in 1995 when Namco released their very first volume of Namco Museum. But here’s the thing- these early collections offered a lot more for their asking price than the more recent Atari Flashback Classics 1 & 2 (PS4, Xbox One) or Megaman Legacy Collection (PS4, Xbox One).


One of my favorite aspects of the early Namco Museum volumes was the ability to take a virtual “tour” of all of the games included on the discs. As a 6 year old who was interested with the arcade generation (despite not having grown up in it) early on and shortly before the explosion of the internet being able to provide all the trivia here, this kind of thing was a gold mine. Many of them even included rooms designed after their respective games- you could visit Pac Man’s house while learning all about the game as well as seeing high-resolution scans of fliers and reading up on how to improve your high score. It’s not much today, but even in hindsight, it’s nice that earlier compilations (especially Namco Museum) went the extra mile to offer more interactivity than just a plain UI. Not only that, but before the popularization of emulation, these were a cost-effective way of getting your hands on these games as arcades began to dry up in the late 90’s. Even today, I would argue Namco Museum, Capcom Classics Collection, and Taito Legends are all worth buying since they all have great emulation of arcade games (MAME is still temperamental when it comes to playing certain games) on top of that extra serving of content.

What truly baffles me as both a gamer and consumer is that more recent packages offering a bunch of classic games in one place seem like they’ve taken a step back, even though technology has obviously hurtled forward. Whether it’s less than acceptable emulation or a laughable amount of content even at their budget price point (or of course, scalping because someone in charge “didn’t realize the demand”) , I’ve found it harder and harder to open my wallet for compilations and plug and plays. While there is a growing list of examples on both fronts, here are two that show just how lazy anthologies and plug and plays have become. 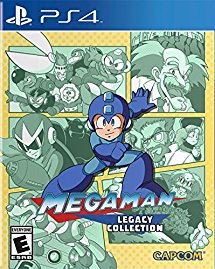 Megaman Legacy Collection was released across all major platforms a couple years ago. Retailing for $29.99 at launch, it features Megaman 1-6 (NES) with almost nothing else in terms of additional content. If this were the only Megaman collection ever released (not counting numerous re-releases individually across Nintendo’s Virtual Console service), this would have been a fairly good deal since they go for $5 a piece on PSN and Virtual Console. The problem is…a better collection already existed well before this on the PS2/Gamecube/Xbox on both the emulation and content front.

Megaman Anniversary Collection released two generations prior, offering Megaman 1-8 as well as an arcade game known as Mega Man: The Power Battle which was never released in the USA. There’s also the once usual “behind the scenes” stuff too. It doesn’t have the input lag issues that Legacy Collection has, either. (If you’ve ever played a classic Megaman game before, I’m sure you know that precision is the difference between life and your character falling into a spike trap) It’s kind of pathetic that a new compilation can’t top an old one if I’m going to be completely honest.

Perhaps one more people are familiar with are the AtGames Sega Genesis Classic Game Console line. This company has been producing mini Sega Genesis plug and plays since the early 2000’s, offering fairly similar line-ups of 80 games. Half of these are always actual Sega Genesis games, with the other half always being incredibly basic stuff such as whack-a-mole and that Nokia snake game from years past.

Already, there’s a big problem- the “80 games” point is pretty misleading. I would consider it false advertising, even. You might be thinking the addition of a cartridge slot for physical Genesis cartridges and the ability to use actual Genesis controllers (which, if you’re going to blow $40 on these, is a necessity since the “wireless” controllers are about as accurate as a TV remote) might be able to make up for the confusion. And it probably would, personally speaking, if it weren’t for one glaring flaw.


Even if you’re hard of hearing like myself…you can immediately tell that something is horribly off in the audio department. While the above is footage of just Sonic the Hedgehog running on AtGames hardware, the same audio problem persists on ALL of the games. Be it what’s pre-installed or what you plug in, it’s going to sound horribly off. And the sad thing is…in the decade they’ve been crapping these out onto dollar store shelves, they have never fixed the issue. It’s just a quick $40-50 for anyone who can’t do a bit of research or needs an easy gift for the game enthusiast in their family.

Perhaps it doesn’t matter as much to some, but for others- it’s a deal breaker. The problem can be fixed thanks to a fan hack, but even so…I don’t think you should have to work for something that should have already been there in the first place. Over ten years ago.

In closing, I want to stress that I’m not completely against companies reselling old games in an “all in one package”. In some cases, these anthologies and plug and plays hold some pretty good value even in the face of PC emulation. I just find the lack of care and content in more recent efforts to be pretty damn sad.

What do you think? Have anthologies and plug and plays become unbearably lazy? Let me know either in the comments or @retrorev96 on Twitter.